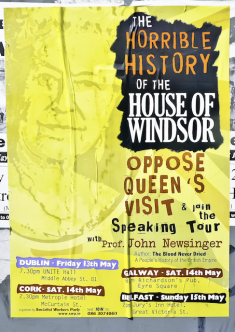 Professor John Newsinger, a prominent British historian, is visiting Ireland to speak on the ‘horrible history’ of the British monarchy. The speaking tour takes place just before the forthcoming visit of Queen Elizabeth.

Professor Newsinger will give open lectures on ‘The Horrible History of the House of Windsor’ in Dublin on Friday 13th in UNITE Hall in Middle Abbey Street at 7.30; in Cork on Saturday 14th at the Metropole Hotel McCurtain St 2.30; in Galway on Saturday 14th at Richardson’s Pub, Eye Square and on Belfast on Sunday 15th in Jury’s Inn, Great Victoria Street.

Professor Newsinger is the author of The Blood Never Dried-A People’s History of the British Empire. He has also written extensively on Irish history with books on the United Irishman and Rebel City, which describes Dublin in 1913. A new updated edition of his British Counterinsurgency is due out in 2012.

The meetings are being organised by the Socialist Workers Party. In a statement, the tour organiser, Gino Kenny, who is a local councillor for the Clondalkin area in Dublin said,

‘ We have organised this speaking tour to give people an opportunity to voice their disgust with monarchy and empire.

‘At a time when this country is suffering terrible cutbacks, taxpayers’ money should not be spent on the pomp and security of a royal visit. The millions of euro that this tour will cost would be far better spent opening the long promised cystic fibrosis unit’.

‘Those who oppose this tour should not be framed at backward nationalists. The very idea of monarchy itself belongs to the feudal era and should have no place in modern society.

‘Nor has opposition to the Queen’s anything to do with opposing friendly relations with the British people. At a time when the tabloid press regularly target social welfare recipients as scrounger, it is an opportune moment to point out that the biggest ‘scrounger’ in British are the idlers who give themselves royal titles.

‘The British monarch has long been a symbol of empire and pomp. Unfortunately, we are again living in an era where there is another attempt to exonerate the imperial role of Western nations.

The myth of the ‘white man’s burden’ is again being played out in the killing fields of Afghanistan and Libya where the British army uses the pretext of humanitarianism and democratic values to take control of parts of the world they have no business being in. It should not be forgotten that Queen Elizabeth is the commander and chief of this army.

‘Many of the tactics of state terror which the British army employed in Northern Ireland have not yet been brought to the surface and that in itself makes this visit untimely’.

‘We call on people across the country to make known their opposition to Queen Elizabeth’s visit in a peaceful fashion and we invite people to attend these lectures.’