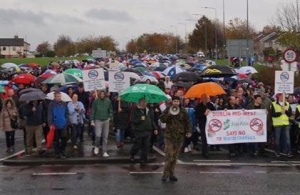 Up to five thousand people attended the Clondalkin and Lucan demonstrations which took place on the 1st November. Speaking after the march which was organised by the Clondalkin Meter Watch and the Lucan Meter Watch campaigns Cllr Gino Kenny said,” Today was colossal. If ever there was a day that people sent a clear message out to the government on how they felt about water charges it was today. The atmosphere and determination on today’s march was electric from start to finish. This was the biggest demonstration in a generation in both localities. People have seen over the course of the last six months the complete injustice is this charge which will simply put people over the edge.

The issue of water charges will be fundamentally won on the street not in any election in the future. I believe the movement is now unstoppable and will only gain momentum in the coming months. The message from today’s match is abolish water charges or we’ll abolish the government.The Clondalkin Meter Watch will be mobilising local residents for the next big  march which will take place on the 10 December at Dáil Éireann”