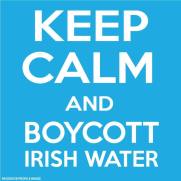 In a statement, People Before Profit spokesperson and general election candidate, Gino Kenny, has condemned a recent decision made my the Department of Social Protection to force Irish Water customers to provide their PPS numbers to avail of the water conservation grant.

Mr Kenny has stated that it would appear that this is yet another lie from the government and Irish Water in order to trick people into giving over their PPS numbers. The Minister for the Environment, Alan Kelly, had previously said that PPS numbers would not be needed.

“This shows one of two things. The first is that the government and Irish Water were either not telling the truth when they said that no PPS numbers were required. Or it is an admission that they do not have a clue what they are doing.

“The Department have claimed that PPS numbers are required to prevent fraud but I would suggest that it is a ploy in which the government are trying to trick people into giving over their PPS numbers. I would imagine that this idea has been in the pipeline for sometime.

“The government still do not seem to get the message, they can have all these clever tricks to try to fool people but in the end they are the ones who will be shown to be fools. They fail to realise that either way people will not pay this extra water tax. We already pay for water and we are not about to give over our PPS numbers so that they can pass on the information once the company is privatised, which we all know is the plan for Irish Water.”