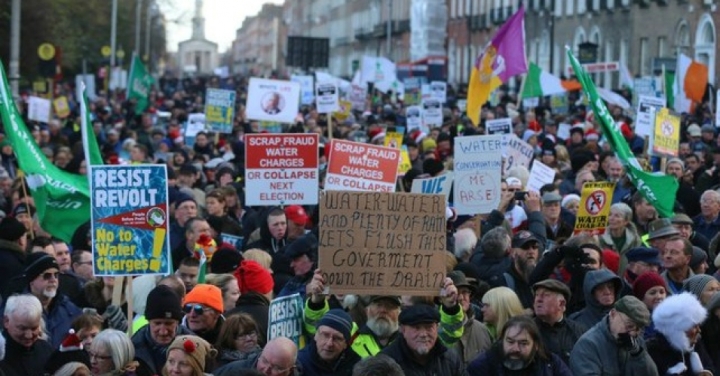 The following statement has been agreed between the People Before Profit Alliance, the Anti-Austerity Alliance and some independent activists including Cllr Brendan Young.

The anti-water charges movement, which has seen hundreds of thousands mobilise and become active in campaigning, has transformed politics in this country. It has forced climbdowns by the government and given people confidence and hope that the austerity agenda can be defeated. It has opened a potential to build a significant Left, working class political movement.

We welcome the initiative by the trade unions involved in Right2Water to host conferences in May and June to discuss a political initiative. The fact that a number of significant unions are discussing launching a political platform and considering support for a range of candidates is a very important development. It could create a political pole of attraction for many who are fighting austerity and oppression – and who are looking for a political formation that fights for genuine social equality.

For a democratic, bottom-up, participative approach

In order for this to have the best chance of achieving its potential, we think it is essential that the process of deciding on a political platform and an approach to the general election is participative, open and democratic. The mobilisation and democratic self-organisation of people in their communities is vital to the strength of the movement against the water charge. Their involvement is essential for the development of mass support and participation in any new political initiative which could have an impact similar to Syriza or Podemos.

We welcome the initiative of the unions to organise events in May and June. But it is vital that these events do not remain limited and invite-only. Instead, they should become conferences involving all sections of the anti-water charges movement, anti-austerity groups and those active in fighting for democratic rights who favour taking a political initiative on an explicit anti-austerity basis.

In advance of the 13 June event, we think there should be local open meetings or assemblies of everybody active in the anti-water charges movement or other active social movements, meeting to discuss the issues and to decide on delegates to send to the event. The meeting on 13 June should therefore be a much larger meeting than 200 people: as well as including trade union representatives and political representatives, it should include representatives of campaign groups across the country, selected by those involved in campaigning on the ground. On foot of this, the June gathering should be able to decide for itself the political positions it adopts and how to proceed – not simply endorse previously determined statements.

Non-payment of water charges is key

We believe that this political initiative should complement the crucial struggle against water charges in the coming months – not become an alternative to it. In order to advance the actually existing struggle against austerity – the movement against the water charge – and to draw on its strengths and develop mass support, the political initiative should champion the demands of the movement, openly call for non-payment and use its forces to organise non-payment and active resistance to water metering on the ground. This should be part of a general approach, which is to use elected positions to encourage struggle from below, rather than focusing on elections and parliamentary positions.

Principled positions against austerity and for democratic rights

We think that the initiative should adopt a principled anti-austerity position. That means committing to oppose and organise to fight against any more austerity and for an immediate reversal of key austerity measures such as water charges, property tax, USC for those on average or low incomes, health, education and welfare cuts. It also means developing a strategy for repudiation of the bankers’ debt; for a write-down of residential mortgages; for taxation of wealth and big business profits; and against privatisation of public services and natural resources.

Instead of putting money into bank debt, we think there should be public investment in housing, healthcare, education, childcare, public transport, water services, renewable energy and environmental protection – as the start of re-orienting economic activity to meet social need and provide useful work for young people and the unemployed.

A new political initiative should stand for the separation of church and state; and commit to extending democratic rights to all oppressed groups: women, the young and the old, LGBT people, Travellers, migrants, asylum seekers and people with disabilities. As a first step, it should commit to campaigning for a Yes vote in the upcoming marriage equality referendum; and to campaign for repeal of the 8th Amendment and lift the ban on abortion in Ireland.

We also think a political initiative should champion the right of workers to defend their jobs and living standards. It should support solidarity action with the likes of the Dunnes workers and action to scrap the anti-union laws. Opposition to austerity should not stop at the border: we think austerity must be fought both in the North and the South. The implementation of Westminster cuts by Stormont is no more acceptable than the implementation of Troika cuts by the government in the South.

This kind of real change requires a political alternative that will break the rules that impoverish working class people. We cannot do that if we accept the approach of Fianna Fail, Fine Gael and Labour – the proponents of austerity, inequality and oppression. So a new political initiative must publicly commit to reject any coalition or deals with Fianna Fail, Fine Gael or Labour.

It should fight for a Left government committed to breaking the rules that impose austerity and that prioritise the restoration of the profits of banking and big business; for a government committed to restructuring the economy and society to meet the needs of people and to protect our environment – including unilateral repudiation, if necessary, of bankers’ debt.
The opportunity to build a substantial political challenge to the rule of the 1% in this country is massive. The initiative by the Right2Water unions can be an important step in building that if it is done on the basis of a bottom-up, participative and democratic approach. If it is based on struggle, non-payment of the water charges and a principled anti-austerity stance, we can have a major impact.

In summary, we think a new political initiative should:

– be open, participative and democratic in its organisation and functioning; – reject coalition with Fianna Fail, Fine Gael or Labour; – openly call for non-payment of the water charge; – have a principled anti-austerity approach that repudiates the bankers’ debt and supports public investment to meet the needs of ordinary people, environmental protection and provide proper jobs; – campaign against oppression and for democratic rights, including marriage equality and repeal of the 8th Amendment; – oppose racism and the scapegoating of minorities.