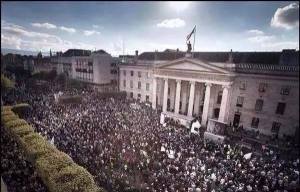 “Two years ago a revolt began against water charges. It was small at the beginning but suddenly took off in creating a mass movement that was not only challenging water charges but the austerity agenda of the FG/ LAB government. It awoke the slumber of working people and challenged the defeatism which the mass media and the political establishment were pedalling. That mass movement of people power on the street and the thrust of the boycott has brought us on the cusp of victory. We are in this strong position not because Fianna Fáil want to scrap water charges it’s because people despised the fiasco of Irish Water and the charges. It’s the beginning of the end of water charges and the end of the beginning of the power of people to transform society. The contagion has begun. Build The Boycott- Break Irish Water.”