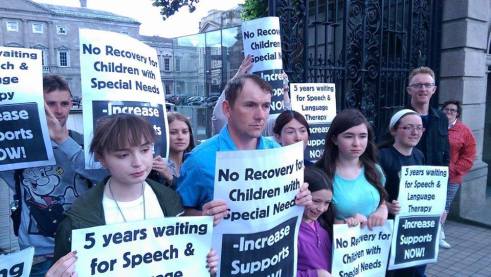 Organised by People Before Profit’s Gino Kenny TD, parents and children experiencing long delays in accessing Special Needs supports in Dublin Mid-West and across the country took part in a protest outside Leinster House on 13th July.

More than 15,000 children are on waiting lists for up to two years for services such as speech & language and occupational therapy and school places and waiting lists grew by 20% in 2015. Following a successful public meeting in Lucan, parents agreed to hold a protest to highlight the lack of SNA services.

Speaking at the protest, Deputy Kenny said, “At the same time that the government talk of economic recovery, there is no recovery for children with special needs. Parents are facing waiting lists of up to two years for these vital supports and this is completely unacceptable. We wrote a letter to the HSE about this situation and received no response. That was when we decided to take this to the gates of the Dail.”

One parent attending the protest, Frances from Clondalkin said, “I have a child with high functioning autism. People from disadvantaged areas don’t have the option to go private so their children are left for intolerable amounts of time without diagnosis. I am here to raise this issue.”

Deputy Kenny said “I am calling on the government to restore all cuts to special needs services and I urge them to reduce waiting lists down to three months instead of the ridiculous situation where children desperately in need of early intervention are waiting up to three years for services. There is clearly money back in the economy and the time to act on this is now!”