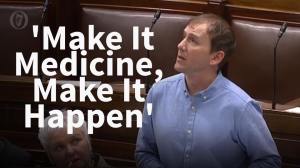 People Before Profit TD, Gino Kenny, has said that he welcomes the publication of the Oireachtas Health Committee report on Medicinal Cannabinoids.

The report, which is a precursor to the HPRA report due out at the end of this month, is a very encouraging report for the most part according to Deputy Kenny.

Deputy Kenny stressed the importance of passing the People Before Profit Cannabis for Medicinal Use Regulation Bill 2016 as soon as possible in order to the releave the suffering of the tens of thousands of people in Ireland who need safe medical access to cannabis based medicines. The Bill is due to enter the committee stage as soon as the HPRA report is available.

Gino Kenny said, “The Health Committee Report on Medicinal Cannabinoids report is a very positive report and I would hope that the HPRA report can now be published without further delay.”

“The need for access to medicinal cannabis for people who need it is of paramount importance and it is vital that the Dáil passes the People Before Profit Cannabis for Medicinal Use Bill through its final stages as quickly as possible.

“There are so many people that are unable to access medicinal cannabis due to the outdated laws surrounding cannabis in this country. Cannabis-based medicines can provide much needed benefits, such as pain relief or relief from spasms or seizures, for people suffering from a variety of conditions including Cancer, MS and Epilepsy.

“Passing the Cannabis for Medicinal Use Bill and making cannabis-based medicines available, on the same basis as other medicines, for those who need it is of the utmost importance”.