Tens of Thousands march for choice – this is just the beginning 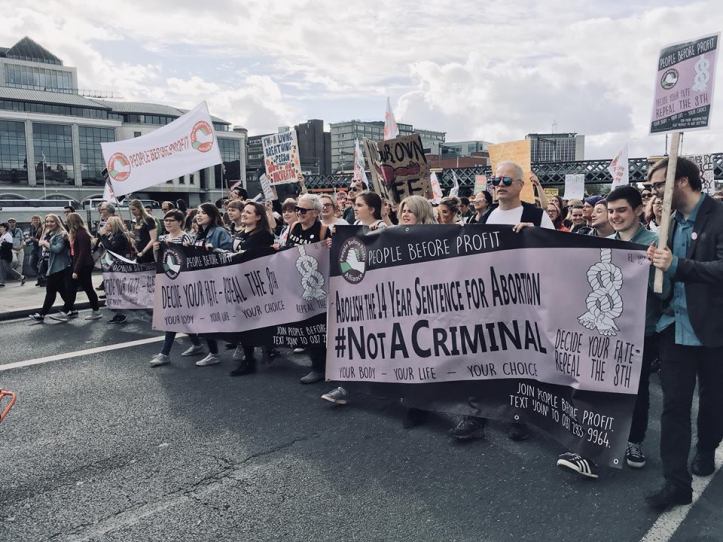 With tens of thousands chanting and shouting for repeal, the March for Choice, organised by the Abortion Rights Campaign,  on Saturday was the biggest in Ireland yet.

USI, Wicklow,  Kerry, Parents for Choice, Terminations for Medical Reasons, Trade Unionists for Choice,  Coaliton to Repeal the 8th  , groups from all over Dublin,  the contingents were loud, proud and many. There were school students and young women who had never been on a march before.

The mainstream parties pontificate about what the Irish people will accept.

Varadkar – shedding any liberal veneer – has arrogantly claimed that pro-choicers don’t understand what repealing the eighth amendment would entail. Both FG and FF say they couldn’t possibly support liberalisation of abortion laws in Ireland and are hoping that by giving their TD’s a free vote they will allow Irish conservatism to continue.Even Labour and Sinn Fein did not see fit to mobilise for the the Pro choice march.

These old-style politicians have got it wrong. Thousands of young people are fed up with their hypocritical covering over the reality of abortion.

People before Profit had a huge contingent on the march.  Brid Smith, People before Profit, TD said she was proud to be part of a movement which had the potential to change Ireland and win for women the rights they have waited for so long.

We should not be hoodwinked by politcians telling us it is so complicated. It is in their interest to stop real change. They fear that if we win this basic right the old pillars of Irish political order will crumble.

And they are right.The message is simple. Repeal the 8th Amendment. Don’t replace it with anything. Get it out of the constitution.Win that and with that momentum we can pressurise the politicians to give us free safe and legal abortion.

People before  Profit believes it is vital to keep the movement on the streets, nationally and locally. Keep up the pressure to have the referendum in May so that the students will be able to take part.

The next step is to get as many people as possible on the bus to Belfast for the march for choice on October 14th. People Before Profit will be running a bus up.

Oct 25th is the fifth anniversary of Savita Hallapanavar’s death because of the Eight Amendment and there will be vigils across Ireland and Dublin.

Local Repeal the 8th groups are springing up everywhere.  We need to build a movement which can represent the many that want real change.