Che Guevara stamp: A great move by An Post 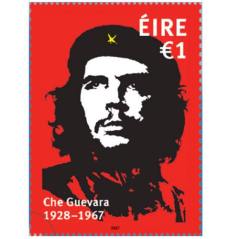 An Post’s decision to produce a stamp with the image of Che Guevara is to be welcomed. It has infuriated right wing politicians and the US embassy but has had a great reception for tens of thousands of people who will purchase the stamp just because of the image.

The stamp features an iconic painting by the Irish artist Jim Fitzpatrick which was made in 1968. Fitzpatrick’s red and black silk screen image of Guevara became instantly famous all over the world. Ever since it has been carried on streets protests from San Francisco to Cairo and is a symbol of rebellion and defiance.

This is precisely what upsets right wing Fine Gael politicians and figures like Lucinda Creighton, the former leader of Renua who claimed it was ‘glorifying a terrorist and a murderer’.

This is gross hypocrisy as Creighton and Fine Gael have participated in commemorations for Michael Collins, who they claim as one of their heroes.

Yet Collins led a group of freedom fighters which the British denounced as terrorists. They fought with guns and bullets and set out to eliminate enemies of Irish freedom.

The context here is all important as it explains why brutal acts are carried out in certain settings.

Guevara was fighting the Batista dictatorship that was funded by the US government and the Mafia who had turned the island into a gambling den and a centre for prostitution.

Collins was fighting a British empire which refused to respect Irish democracy and which had unleashed murder gangs to assassinate Irish republicans.

An Post’s decision must have been made in the teeth of expected opposition from the usual quarters.

People Before Profit is urging supporters to go out and purchase the stamp to post to their friends in the USA.

The sight of Che Guevara on an Irish stamp will undoubtedly annoy the Trump regime – but that is reason itself to praise An Post for their initiative.