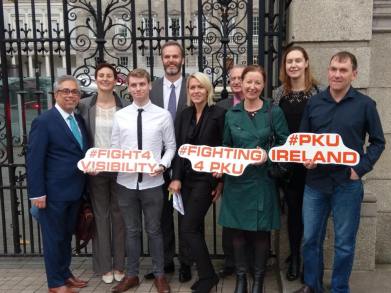 People Before Profit TD, Gino Kenny, welcomed guests from the PKU ‘Fight for Visibility’ group to brief TDs and Senators in the Dáil last Thursday.

Deputy Kenny said, “I was eager for my Dáil colleagues to hear more about the rare metabolic condition, Phenylketonuria (PKU). It was also an opportunity to discuss what we can do to convince the Government to approve the PKU treatment drug Kuvan so that it can be made available to those with the condition.”

Ireland has one of the highest rates and most extreme cases of PKU in Europe. People with PKU are unable to break down an amino acid called phenylalanine (phe). This is a natural substance found in food but in people with PKU, phe builds up in the blood and in the brain and can cause serious problems, including if untreated, severe brain damage. All children born with the condition must adhere to a strict low-protein diet to prevent the development of acute, irreversible mental and physical disabilities.

The only medical treatment for PKU, Kuvan, can dramatically help some people with PKU vastly improve their quality of life, critically improving cognitive functioning and reducing the real threat of long-term irreversible brain damage.

The drug is currently available in nineteen countries throughout Europe and Deputy Kenny believes that Ireland needs to review the criteria it uses in approving drugs for rare illnesses or conditions.

“The criteria used for assessing drugs used to treat more common illnesses are also used for rare conditions making it much more difficult for drugs like Kuvan to be approved. The Government’s priority is value for money but how can you place a monetary value on people’s health and well-being? It’s time to look at this so that people are not denied the medications they need. A final decision on Kuvan has yet to be made by the Minister for Health and the HSE and I urge them to do the right thing and alleviate the suffering and hardship of people with PKU and their families,” said Deputy Kenny.