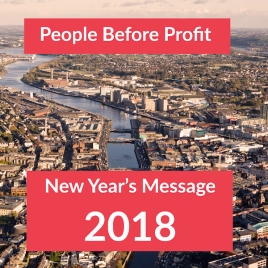 2018 has barely begun and already tens of thousands are protesting in Iran. It gives lie to the idea that Muslim people blindly obey their religious leaders. If the people of Iran can face riot police and live bullets, then the people of Ireland can also rise up.

Up to recently, our elite got away with injecting the poison of fatalism into the population. How often have you heard your own neighbours or friends repeat the line ‘The Irish will never fight’ or ‘You will never beat them’?

The implication was clear – you were living in a corrupt state but you could never challenge it.

The water charges movement changed all that.

This movement of ‘people power’ defied the media, the right wing politicians and the police – and beat them all. The political establishment suffered a major defeat and have been forced to change their method of rule.

Today Fianna Fail pretend to be a ‘centre left’ party – even when they join with Fine Gael in stopping a referendum to put a legal right to housing into the Irish constitution.

Fine Gael has chosen a Thatcherite as their leader. But he has to cover his tracks by pretending to be a liberal.

The reality is that Ireland is ripe for change. It is the one country in Europe where the far right do not have a foothold and where the political trajectory is to the left.

In 2018, People Before Profit will be pressing forward on a number of fronts.

HOUSING: Most young people will never their own house but will be stuck renting for the rest of their lives. They have no security and landlords can push up rents when they like. One reason is that a third of Fine Gael and Fianna Fail TDs are landlords.

The only way to bring change is through a mass movement – just like we did on water charges.

People Before Profit will be working hard to bring about a huge demonstration of people power on April 7th. The biggest unions in the country are backing this day of action. So too are housing organisations such as the Peter McVerry Trust.

We want to see tens of thousands on the streets in order to galvanise a movement than will take direct action to bring the housing crisis to an end.

REPEAL: We live in a country where a woman can get a 14 year jail sentence because she takes an abortion pill to stop an unwanted pregnancy.

This legal absurdity comes from a clause in the Irish constitution which equates the life of a grown woman with that of a one day old foetus.

People Before Profit will be at the centre of a movement to repeal that eight amendment.

WORKERS RIGHTS: Last year, People Before Profit worked closely with the pilots union to highlight the anti-worker practices of Ryanair.

The political establishment were so scared that they tried to stop their representatives giving evidence to a Dáil committee.

But, once again, a determination to fight defeated the poster boy of Irish capitalism. If Michael O Leary has to accept unions, then the other bullies who trample on workers’ rights can also be challenged.

In 2018, People Before Profit will be supporting a Return to the Unions campaign.

LEGISLATION: The presence of the radical left in the Dáil and in Stormont has highlighted issues that were never raised before.

In 2018, we will press ahead with legalising medical cannabis for the tens of thousands of people who suffer in chronic pain.

We will also move a Bill to stop the issuing of new licences for fossil fuel exploration. Unless we keep fossil fuels in the ground, our planet will burn.

GENERAL ELECTION: The chances are that there will be a general election in 2018 and we are ready to fight. We will be running twenty candidates across the country and our allies in Solidarity will be running more.

In almost every constituency, there will be an opportunity to vote radical left.

Varadkar has spent millions on his PR to convince us that we are happy and content. But elections across Europe today are full of surprises.

Will you support a party that will never join a coalition with Fianna Fail and Fine Gael?

Have you had enough of decades of right wing rule and want real change?

Do you want to fight for change North and South?