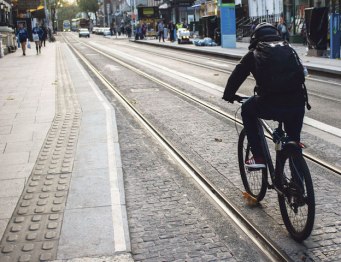 Reply a rehash of response to DCC two years ago.

Deputy Gino Kenny said he was angry at a response to his question on cyclists safety from the NTA., The TD said “the answer I received is almost word for word the same as a answer given to DCC two years ago. The study quoted the same report in 2016 but ignored the wider conclusions of that report : the need to integrate cyclists in a safe way with new tram lines BEFORE you build or open them. It appears to me cyclists have been ignored completely by the NTA”.

A 2012 report suggested two solutions could work ( VeloStrail and Phoenix Rail Filler) in high risk areas, if and when there was an extension to the Luas network; it seems clear that the NTA did not consider this with the new Luas line

The TD, who is a keen cyclist, said he was horrified by the number of incidents, some serious, that he had witnessed at busy junctions where cyclists had to cross the new tracks at awkward angels.

Deputy Kenny stated ” I accept that rubber infills are not a magic solution, but ti seems clear that the NTA did not try to study any new developments in their use, and certainly didn’t look at integrating cyclists into their plans from the earliest stage of planning. The infills can work the problem is the costs and need to maintain and replace.

I have asked the NTA for more details as to the exact costs and what the maintenance needs are of the latest infill products. In the meantime we really need to improve signage and road lay out at those junctions that are particularly dangerous.”