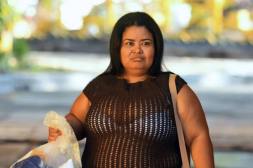 ‘When we win, you will be arrested,’ chanted a group of anti-choice campaigners at Brid Smith, the People Before Profit TD.

It might sound like a bit of nasty bravado but it is exactly what they want. There is already a provision in the Protection of Life During Pregnancy Act 2013 which provides for a 14 year jail sentence for women who use an abortion pill.

Despite the fact that over one thousand women take this pill each year, it has never been implemented.

But El Salvador shows exactly what could happen if the anti-choice campaigners get their way. Maira Figueroa has just been released from prison after serving a 15 year jail sentence for having an abortion. She was raped when she was aged 19 and decided that she did not want the child of a rapist. Under a law that came into force in 1998, all abortions are illegal in El Salvador, including those for rape or those which arise from a medical threat to a woman’s life.

Women, who have an abortion, are charged with ‘aggravated homicide’ and can be jailed for up to 30 years.

Maira Figueroa’s 15 year sentence could have been even longer but she was given an ‘early’ release. The next time you hear the anti-choice campaigners cry ‘murder’, remember Maira Figueroa. She lost 15 year of her life because the fanatics got hold of the legal system. They will do the same here –if given an opportunity.

Let’s re-double our efforts to win Repeal. The freedom of women could literally depend on it.