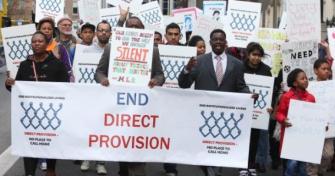 People Before Profit TD Gino Kenny has called for the Department of Justice and Equality and the Reception and Integration Agency (RIA) to initiate a statewide and comprehensive health and safety review of all direct provision centres in Ireland.

He also called for any direct provision centres who are in breach of health and safety regulations to be severely punished.

The TD for Dublin Mid-West made the call in light of the revelations of a rat infestation at a direct provision centre in Sligo. Residents of the centre embroiled in the controversy have reported being bitten whilst sleeping by rats and that the response of the centre was only to put down rat traps.

Gino Kenny said: “These reports are very concerning and what I want is for the Department of Justice and Equality and the RIA to instigate an immediate review of the health and safety standards in all direct provision centres across the country.

“Harsh penalties need to be handed down to any centre in breach of a health and safety review.

“It is absolutely disgusting for people to have to live or sleep where there is a rat infestation. Reports in the media of people being bitten on the ear while they sleep or their feet being bitten are shocking.

“People Before Profit have long campaigned for direct provision to be abolished and for asylum seekers and migrants to be treated with respect. Direct provision is essentially an open-air prison and the reports coming out of Sligo are showing us that the conditions in this centre are like a prison from the 1800s.”