New Year Message: Capitalism is in Decay: Lets Organise to Change it 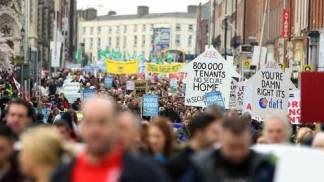 There is panic on the floor of the world stock exchanges. The speculators are worried that their system is experiencing increased ‘turbulence’ once again.

They look at Trump, with his daily tweets, and think – how did this unpredictable maniac get to be the ‘leader of the free world’.

They watch as Central Banks ease up the creation of cheap money and worry about the consequences. Better than most, they know that capitalism was only kept alive by governments who printed money to ‘stimulate demand’. But as interest rates rise, the rich worry about a return to normality.

And then there is the threat of a new trade war between the US and China and the Brexit break with the EU. It is becoming all too reminiscent of the period before WW1, when the declining empire of Britain sought to restrain its upcoming rival, Germany.

These developments are bringing to an end a period of high profits and easy money –for the rich. This has the potential to keep them up at night, but there is another prediction that barely causes a loss of sleep for CEOs of the big corporation – the prediction that we have just twelve years to stop runaway climate change.

The Intergovernmental Panel on Climate Change has warned that if we do not limit the heating up of our planet to 1.5 degrees Celsius, humanity faces increased dangers for survival. But this barely causes a jitter in the global stock markets – because it is not about profit.

We live in a mad world where vast fortunes are made while 25,000 people die each day from hunger and malnourishment. That is the equivalent to sixty jumbo jets crashing – yet it barely makes the news. It’s just considered normal.

The only difference as we enter 2019 is that the system is more chaotic, more unstable and more threatening to our lives and to the planet itself. That instability is driving an increasing number of rulers – and political adventurers- to embrace a dark message of racism and xenophobia.

Since the 1980s they have relied on neo-liberalism, which pretended that we were all like permanently individualized customers in a shopping centre, as the main justification for their rule. But now they increasingly stoke up fears about immigrants to rally us all around their right wing world view.

Up to now Ireland might have seemed immune to many of these developments. It has turned in record figures for growth year on year.

But on closer inspection it turned out that these growth statistics had more to do with US multi-nationals locating intangible intellectual property here – rather than any major surge in real investment.

Even when the system was in recovery, moreover, it could not deal with the key issues that face people – like having a home, a decent job and proper health care.

We live in a country where young people must stay living at home until their 30s – because they cannot afford the crazy rents and work in poorly paid, precarious jobs.

A country where people wait for years for operations that can alleviate pain.

If this is what Ireland is like when capitalism is apparently working, we can only imagine what disasters will come with another global recession.

This is why we need to organize for change – and there are just two ways to do that.

We need a mass movement of ‘people power’ to force the elite to bend to our wishes. The first target for that must be a huge movement around the housing crisis. In 2019, we need tens of thousands on the streets calling for social housing, rent controls and an end to evictions. We need to bring the same pressure to bear as we did on the water charges and in the repeal movement.

We also need political change so that Ireland is not dominated by parties like FF and FG. One third of their TDs are landlords so they vote down bans on evictions or rent controls – despite an obvious conflict of interest.

People Before Profit will be fielding a large number of candidates for the European and local election in May. To achieve success, we need your support and this is why we urge you to join us in a movement for change.