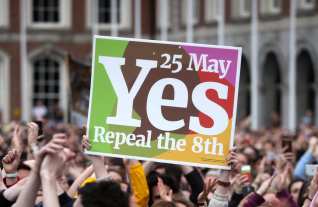 Another woman has been forced to travel to England after her experience of how the Irish medical system deals with a fatal foetal abnormality.

The case was raised in the Dail by Brid Smith and Ruth Coppinger from People Before Profit and Solidarity. Both were shouted down by a Ceann Comhairle, who claimed it was inappropriate to discuss an individual case.

However this is not just about one individual – it gets to the heart of the deep networks who are working to thwart the democratic will of the Irish people. Here is what happened.

A woman presented herself to the Coombe Hospital in Dublin with a fatal foetal abnormality because a scan had shown that the organs of the foetus lay outside the body.

Two doctors agreed that a termination was necessary but the woman was later informed that ‘the board’ had ruled against it. There was a suggestion that she might go home and wait for a miscarriage. Reference was also made to the possibility of going to England.

The case shows how, conservative dark forces are at work in the Irish health system.

First, there has been no serious drive to provide resources and training to ensure that abortion services are available. Health Minister Simon Harris claimed these would be in place by January 1st 2019. But the Board of Management of the Coombe, which caters for up to 10,000 pregnancies a year stated that abortion services would NOT be available from January 1st as they were still waiting for the necessary resources..

But this begs simple a few questions – why did they or the Department of Health or the HSE not ensure that equipment and training had been in place ? And if, as they claim, resources were lacking why was the women not referred to another Irish hospital.

The reality is there is a controlled inertia in place to stop abortion services.

Second, there is an ambiguity in the law. There is provision for abortion after 12 weeks for fatal foetal abnormality. But if there is any ambiguity on how long a foetus might survive or under what conditions they would live, conservative doctors or managers can draw on references to disability in the same legislation.

In other words, they can take the decision on whether or not to have an abortion out of the hands of the woman.

That all needs to change if we are to stop women being forced to travel to England.

We need to a real left wing Minister for Health plus a mass popular movement to drive through the measures to give effect to the people’s vote.