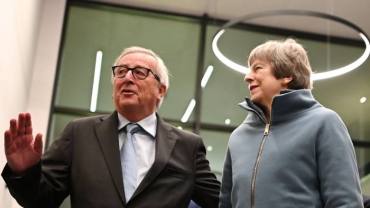 The high drama over British-EU negotiations has produced a measly fudge.

In effect, Britain has manged to put some sort of a time frame on the ‘backstop’ – the legally binding arrangement to avoid a hard border in Ireland. They even have a date, December 2020, for their get-out clause.

The mechanisms for doing this are shrouded in ambiguity. In the words of May’s deputy David Lidington, the Tories believe that a commitment by the EU to this time frame means that they can trigger “a formal dispute, through independent arbitration, that a breach had occurred – ultimately suspending the protocol if the EU continued to breach its obligations.”

Behind all this legal jargon lies a simple fact – namely that both Britain and the EU are willing to use the Irish border as a lever in these negotiations. The Tories haven’t the faintest clue about the realities of the border and are willing to do anything to please the DUP who prop up their government. The backsliding by the EU, too, has made clear it has no permanent commitment to undoing partition in Ireland or stopping a hard border.

Varadkar was left on the side lines for this eleventh hour drama. But the Irish government will still go along with the EU because it has steadfastly refused to take any independent stance. Despite clear calls from People Before Profit it has consistently refused to make a public declaration that it would never impose a hard border. That means that it is now at the mercy of the EU’s negotiating strategy.

People Before Profit will renew its call for the Irish government to declare that it will never erect a hard border, whether in the event of a no deal Brexit, or in 2020. This is now more urgent than ever in view of the EU’s backsliding.

We will support calls for civil disobedience should May insist that a hard border be established after December 2020, or if Westminster decides to pursue a no deal Brexit.

Crucially, we assert that the only long-term democratic solution to this mess is a border poll – conducted in both Irish states – that allows people to remove the scourge of partition.