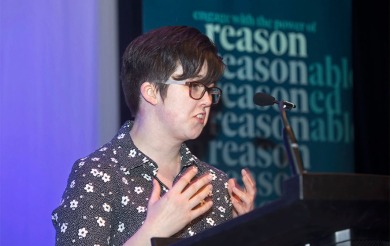 The Killing of Lyra McKee by the New IRA was despicable. No cause could possibly be served by this murder- it was completely futile.

Lyra McKee was an active member of the National Union of Journalists who was simply doing her job in reporting on a riot situation.

The New IRA has issued an apology for the killing and called on its members to use greater ‘caution’ when confronting the PSNI with an armed action in the future.

But the reality is that the tactic of armed struggle has little public support and is totally counter-productive. It will do nothing to help achieve Irish unity.

In the aftermath of the killing, a DUP council candidate, David McKee was pictured at a UDA terror fest. This organisation was involved in the murder of individual nationalists to intimidate and frighten a wider population.

The failure of the DUP to expel this candidate makes a mockery of their condemnation of the New IRA. To understand how tragedies like the killing of Lyra McKee can occur we need to look a little deeper.

People Before Profit have pointed to the deep pockets of poverty that exist in both Catholic and Protestant working class areas. These will only be made worse by introduction of PIP and Universal Credit which attack social welfare recipients. The main parties in the North allowed the Tories to introduce these measures – in return for cutting the corporation tax.

Poverty has provided a small but important breeding ground for paramilitaries.

While the Good Friday agreement brought peace, it also locked the ‘two communities’ into a process of permanent competition with each other. Far from sectarian sentiments declining, polarisation has grown.

In this situation, small minorities still believe that armed struggle – rather than mass action by working people – is the way to achieve their ambitions. After all, they were told that for decades by the very Sinn Fein leaders who currently condemn them.

People Before Profit advocates a different route. We encourage and help to organise mass action against poverty and repression.

We want to see a 32 county socialist Ireland that will be achieved through working class people challenging both rotten states on this island.

It is from that stance that we oppose the actions of the New IRA.