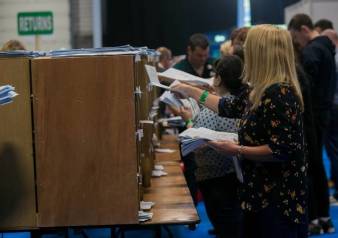 The radical left had a setback in the recent elections. People Before Profit lost good councillors and saw its vote drop slightly. Overall, however, the foothold that has been established in recent years in electoral politics has been held.

Four factors were at play in the result.

First, there is a welcome and growing awareness that we have a climate emergency. Many want practical solutions and, despite the modest measures proposed in their manifesto, the Green Party was seen as the most likely to deliver. Few remember their very poor environmental record when last in government with Fianna Fail.

Second the manual working class did not turn out in large numbers to vote. They had tried Labour in the past and were increasingly looking to Sinn Féin. Yet Sinn Fein has begun to drift to the right, opening itself to becoming minority partners in a Fianna Fáil or Fine Gael led coalition. At a more local level Sinn Fein councillors have tried to develop friendly relationships with the unelected management of local authorities in the hope of building a base through clientalism. Many working-class people have become cynical of this game because so little has been delivered. In Dublin City Council, for example, where there is supposedly a Sinn Féil-Labour ‘progressive coalition’ just 5 standard houses were built last year -even though there are 17,.000 on the housing list.

Third, the radical left has not able to galvanise people in sufficient numbers over the housing crisis. In the absence of a vibrant social movements, many returned to a sense of a fatalism – the ‘sure what can you do’ attitude -and this does not benefit the left.

Fourth, Irish capitalism, which is currently riding a wave of success and economic growth, has tempered the anger that people felt about austerity. This does not mean that there is enthusiastic support for Fine Gael or their partners in Fianna Fáil. Their combined voter base is still stuck at around 50% of the electorate (46% in the European and 52% in the locals). However raw anger is not the predominant mood of many workers at the moment and there are differing responses between white and blue-collar workers.  Blue collar workers see the inequality and are deeply resentful but not confident that change can come. White collar workers are more open to persuasion about the new ‘progressive liberal’ discourse of the Irish elite but they are starting to question it.

People Before Profit activists are already picking themselves up from the electoral setback and will be resuming our struggles.

Over the next few months, we shall be approaching green voters with a positive attitude, urging them to join with us in struggles to effect change. One June 11th, for example, People  Before Profit is presenting a Climate Emergency Bill  in the Dail to keep fossil fuels in the ground. We should work together to mobilise support, including gathering at the Dáil at 11am. Before that, we should work together to oppose the visit of Donald Trump. More broadly, People Before Profit will be devoting more time and resources to communicating its message that we need system change to save our planet. We shall also be spelling out the steps that need to be taken immediately. We shall urge Green voters not to support entry with into a coalition to ‘greenwash’ Fine Gal or Fianna Fáil but instead to support mass struggles from below to effect change.

As a party, we shall also seek to re-energise our manual working class base. Throughout this election campaign, we encountered huge issues that affect people that are rarely covered by the main stream media- including evictions by vulture funds, noise pollution that is driving people demented  and shocking conditions that some council tenants face. In areas where we won council seats and in those areas where we did not we shall be going back to mobilise ‘people power’ campaigns to bring change.

Politics is not summed up by elections, and struggles go on well after the ballot box closes. People Before Profit does its best to articulate the aspirations of working people on whatever platform we can.

But we also point out that the most important struggles are those conducted by the mass of people themselves rather than just waiting for representatives to act.