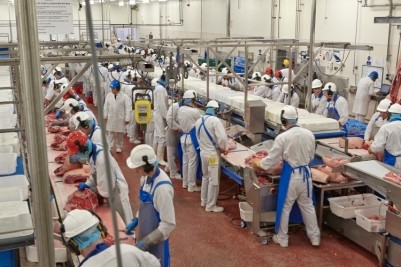 People Before Profit TDs, speaking at a media conference before the Dáil session on Thursday, said that the government must do more to protect vulnerable workers and sectors whose jobs and health in some cases are in a precarious position during the Covid-19 crisis.

The TDs called for the government to produce a roadmap for these vulnerable workers and sectors for their safety and the viability of their livelihoods following the crisis.

They said that the governments handling of the meat plants has led to a disaster unfolding before our very eyes.

“There are many groups in Irish society who feel that they have been left behind by the government measures to deal with the Covid-19 crisis and who are very concerned about the viability of their livelihoods and industries following this crisis.

“We are calling on the government to devise and outline, as a matter of urgency, a roadmap for workers in sectors that feel like they have been left behind. Arts workers, taxi drivers, English Language teachers; and workers in retail, like Debenhams, those from the hospitality sector are facing a very precarious time in the future with the impact that the crisis will have on tourism, live events and the wider economy. The government need to be proactive now, they need to include all those who have lost their income as a result of the crisis, in the Covid-19 payment, they need to urgently talk to these workers and develop a roadmap to secure these workers’ livelihoods.”

Gino Kenny TD, who will question the Minister for Health, said: “Health workers who are on the frontline battling this virus need to have proper and regular testing to make sure that they are able to isolate if they do become infected. Similarly, nursing homes and care staff in them need to be tested regularly. I will be asking the Health Minister to guarantee that all health workers will receive regular testing so that we can protect healthcare workers and residents of nursing homes. That this has not happened yet is a disgrace.”

Bríd Smith TD, who will raise the worsening situation in meat plants with the Minister for Agriculture, said: “I would like to echo the call of the Migrant Rights Centre that meat plants who have recorded clusters should be closed down for two weeks, given a deep clean and be allowed to fumigate. We have now 16 clusters and the HSA still have not gone into these places and shut them down. It is a disgrace that there can be animal inspectors going into these plants to check the quality of the meat and yet health inspectors still have not gone into these plants in the interest of the workers. It is utterly scandalous that this has been allowed to happen.

“We have seen stats from the US which show that clusters in meat plants are more likely to have a higher rate of infection in the area surrounding these facilities. Closure of these plants with clusters could not be more urgent.

“The workers in these plants are scared and frightened by this situation and the government have been shockingly show in dealing with this matter. Their inaction has led to a disaster unfolding before our very eyes.”