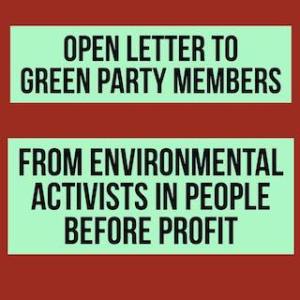 We are contacting you to urge you to reject coalition with Fianna Fáil and Fine Gael. As climate activists and concerned citizens we have worked and campaigned alongside many Green party members over recent years.

We believe that the growing climate movement has the potential to force Governments all over the world to address the crisis with radical measures and proposals advanced by that movement and by the continued activism of people on the streets and in campaigns.

We fear that if the Greens enter a coalition it will demobilise many and sow illusions in others about how change can happen and what can be achieved in a Government dominated by two neoliberal parties.

Let us be honest; neither Fianna Fáil or Fine Gael are interested in the kind of measures we need to take to avert catastrophic climate change, neither will confront the vested interests in fossil fuel industry or corporate business that are propelling CO2 emission and neither will take the radical measures needed in public transport or setting up a publicly owned utility that can invest and harvest renewable energy such as off shore wind.

Neither will be interested in taking on the beef barons and corporate food interests in the agricultural sector that is necessary to reduce emission there. Instead they will defend those interest pretending they are looking after the ordinary farmer. Both will defend the rights of private companies to make decisions about fossil fuel infrastructure, investment and use.

Neither will deliver a just transition that looks after workers, communities and the most vulnerable We don’t have 5 years to waste in another failed coalition experiment with right wing neoliberal parties. The climate and our biodiversity do not have 5 years to watch promises turn to dust.

We need to continue building a movement that can force any Government to take the real action needed. If the Greens enter coalition now they will turn their backs on that movement.