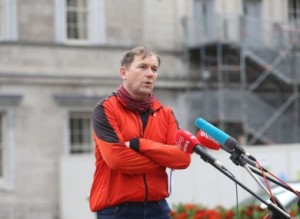 People Before Profit TD Gino Kenny has said that the government’s attempt to delay the progress of his Dying with Dignity Bill, by proposing an amendment to send the bill to a ‘special committee’, is unacceptable and that the bill should be given a free vote to progress to the next stage in the bills process.

He said that the government is “unduly delaying the process” in order to bury the bill so that it “will not see the light of day”. He pointed out that there is no need for another committee as all the arguments for and against the bill can be heard at committee stage of the bills process.

He said: “This is totally unnecessary and a delaying tactic by the government.

“The committee stage of the bills process would allow for testimony on the bill and this would allow for democratic discussion on the matter. We are legislators and we must deal with these difficult issues in the democratic forums that we have in the Houses of the Oireachtas. The government must withdraw their amendment.”