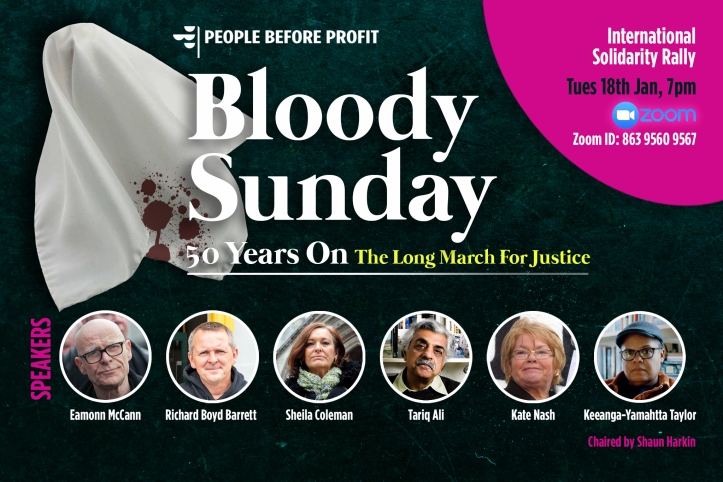 On January 30th, 1972, 13 innocent people in Derry were callously murdered by members of the British army’s Parachute Regiment. Half a century on, the British establishment continues to obstruct moves to hold it to account for these criminal actions. The long march for justice continues.

2022 marks the 50th anniversary of the terrible event known as Bloody Sunday. But is also a milestone in the long march for truth and justice that continues to this day. Join us for an international online solidarity rally, as we remember this tragic occasion, and recommit ourselves to ending state repression both here in Ireland and internationally.

Eamonn McCann: journalist and recipient of the Amnesty International Media Award for his campaigning around Bloody Sunday.

Kate Nash: campaigner and the sister of William Nash, who was killed on Bloody Sunday.

Shelia Coleman: a spokesperson for the Hillsborough Justice Campaign and former chair of the Liverpool Irish Centre Cooperative.

Keeanga-Yamahtta Taylor: writer, activist and author of From #BlackLivesMatter to Black Liberation.

Chaired by Shaun Harkin: People Before Profit Councillor in Derry.